I was graced with the opportunity to do my electives from Kwame Nkurumah University (KNUST) on merit after interviews. I was the only student from Makerere university to this university, however, other students went to Kenya, Rwanda. Thanks to GEMx which sponsored the four weeks exchange program from 6th June-8th July.

Dr. Isaac Ssinabulya booked for me a ticket to and from Ghana via Ethiopia airline, by then my passport and yellow fever card were ready, when I received my ticket, I was so excited because now I was sure I was to travel by plane for my first time. Traveling to Ghana is visa-free. Two cars filled with my friends escorted me to Entebbe international airport from Makerere University at mid-night. My flight was at 2:45 am from Entebbe, from Entebbe we went to Ethiopia and from Ethiopia, we got another plane to Accra-Ghana and from Accra, I got another plain to Kumasi then I got an uber to my hostel. I reached Kumasi at 6:20 pm mind you Ghana is 3 hours behind Ugandan time, meaning it was 9:20 pm in Uganda. 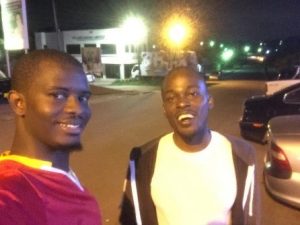 When I arrived at the hostel, I called my Ugandan friend who studies from KNUST and he made life easy from me, he contacted the exchange officer at the facility. He led me to my room which was already organized. We had a lot of jazz with my Ugandan friend to brief me about the place. For accommodation, I paid at the end of my stay to the facility manager 25 cedis per day. Each room had a fan and refrigerator because the country is generally hot, my neighbours were also exchange program students from the USA and my roommate was from German also for the exchange program. 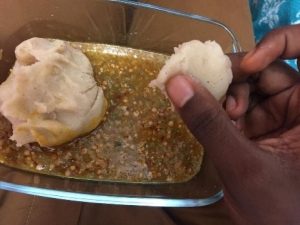 The available places of food were restaurants around the hostel which had a variety of food and snacks, I didn’t get chance to try most of their foods because am not a fan of chili, most of the source had a lot of pepper which was so hot, and this was a limitation to my exploration. I tried banku and okra soup once, but it was also hot I dint give it a second try, most of the days I would have rice and chicken which cost 8 cedis for lunch and I would also eat the same for supper with some watermelon.

THE PEOPLE AND LANGUAGE 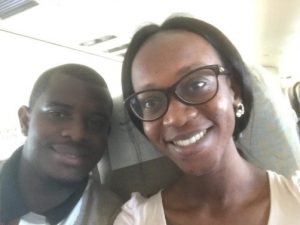 I can possibly say, Ghana has the friendliest people I have ever met, not that I haven’t met all of them, but it gave me that ill-feeling that I don’t usually act in the same way when other visiting international students come to Makerere, I mean, who stops and asks if you are lost and then after directs you, where you desired to go. The only challenge though was the language, Ghanaians speak a variety of local languages, mostly Twi and also their English was a little fast, lecturers who crack jokes in the local language ad I would just look at others laughing while not knowing why they were doing so. 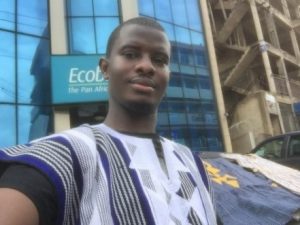 Most of the evenings I used to go for evening walks around Kumasi walking a distance of over 5 km in any random direction where I saw a variety of local natives and businesses, at times I would meet very many people during market days and I would do window shopping asking for price sand converting to Ugandan shillings, some items where so cheap compared to Uganda and I would buy them, like the ones below

Some nights we would go to club as international students for karaoke where we would ask for songs of our choices and we would sing, I can’t forget the night I asked for a Ugandan some called “neera neera” by moze radio and the entire club was so excited to listen to music from Uganda, they asked me the meaning of the song and I told it meant “we do it again and again”

I also used to go to KFC for chicken with my friends because I found it a bit cheap and the place was so cool, the package I always used to buy was 21 cedis with 2 pieces of chicken, chips and a small soft drink, other packages were also available but at affordable prices.

I used to visit Baba Yara sports stadium whenever the Kumasi team was playing because am fun of soccer and my weekends would be so cool with Kotoko football club winning all the time. However, I dint visit recreational places like other international students including cape cost and national game parks because it wasn’t catered for in my budget.

Well if you are from Kampala and you are used to bodaboda guys, in Kumasi I dint see any, the commonest means of transport by university students was uber which would always be available at all times, this was a bit expensive for someone who is used to using bodaboda guys who rarely go beyond a dollar yet in Ghana the cheapest uber would be like 2.5 dollars. Taxis also existed and they were a bit cheap but so challenging to use because of not knowing the local language and the places.

THE WEATHER AND CLIMATE

Ghana has two seasons just like in Uganda; the rainy season and the dry season, by the time I reached Ghana it was a dry season, but the temperatures were so high compared to Uganda, for this reason, all rooms and places had fans and refrigerators plus air conditioners. I was informed that even during the rainy season it’s also too cold and someone needs a sweater or jumper all day including a heavy blanket, unlike the period I was there whereby even fans would work all night and no need of a blanket to cover yourself.

Gained more knowledge in history taking, examination and different diagnostic approaches used in obstetrics and gynaecology. Mothers may not present with obvious signs and symptoms of illnesses due to physiological changes occurring during pregnancy. This has helped me to know that no single symptom in a mother should be ignored because it may be the only symptom present for an undergoing illness however insignificant it may seem to be. Learnt about the different diseases affecting mothers in pregnancy in Ghana. Urinary tract infections and sexual transmitted being more prevalent, as opposed to Uganda where malaria in pregnancy being more common. Learnt the coordinated care of a mother from the time of conception. The mother is under the care of an obstetrician who sees her during ANC to child birth and follow-up during the PNC. This practice has improved the quality of life among mothers in kumasi as pregnancy related complications are diagnosed early and proper management is given. I improved on my communication skill with peers, doctors, nursing staff and consultants I improved on my clinical skills in assessing for the fitness of a mother for normal delivery. I got chance to experience medical practice in a better resourced setting.

In summary, it was such a great time and experience for me in Ghana, I again would like to thank MakCHS for having allowed me to go there and GEMx for the support, my supervisors, my tutors from the department of OBGYN for this wonderful moment and finally the people of Ghana for the hospitality, the love and support.