Journey to the Art of Medicine and Life

By: Kirellos Atef Zaki Abboud from Ain shams University (Egypt) who has completed his elective at The University of Pavia (Italy) through GEMx

It was my first time in Europe. I was a bit afraid and was expecting a lot of troubles. When the plane was landing, I could see how Italy is beautiful and how it’s so green. You could only see green areas, homes, and roads. It was so charming and relieving just to look at it for 15 minutes before landing. I landed safely and started my journey in a foreign country. I searched for a place to stay hoping for an apartment and luckily, I found a suitable one. I traveled on Friday so by the time I arrived it was the weekend. I decided to have a tour on foot to explore the shops and transportation. I found it difficult to communicate at first because not many Italian speak English, but after about ten days I could speak some Italian words that are useful at shops and transportation, and of course google translator was a savior in many situations. 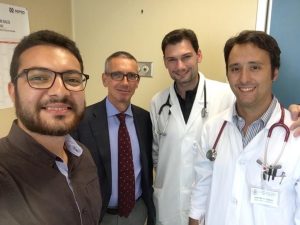 I called Prof.Ciro Esposito – The Head of Nephrology Department at ICS Maugeri – and informed him that I’d arrived, and he explained to me the way and the transportation I should take to reach the hospital. I met my colleagues, there were three from Poland and one from Cameroon all on an Erasmus elective. I enjoyed their company a lot, they were kind and helpful.

My first 2 weeks at the hospital were in the ward, every morning the professors accompanied us to the inpatients and started explaining their condition, different possibilities for treatment and what we should focus on such cases. Some days our professors had some checkup visits for patients who were discharged from the hospital within the last few months. It was so informative to see such a huge number of patients in such a small time. The average number of patients we see daily was about five patients in the ward and maybe one or two for a checkup. The professors taught us a lot of things concerning Nephrology, how to take a history, how to examine patients, different kidney markers in lab tests and many things that I would list later. 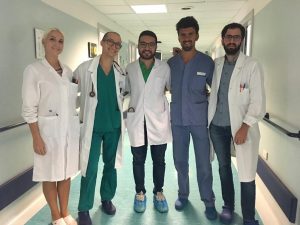 My second 2 weeks were in the dialysis ward, every day the professors accompanied me for the round, we checked the patients performing their dialysis session concerning their compliance to medications, their overall health, if there is any