From Kampala to Rwinkwavu: Experiencing Rwanda and its Health Systems 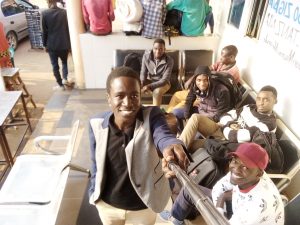 On the 27th day of July, at about 7:15 pm, I left my room and headed to the Trinity bus parking lot. By 8:45 pm Marvin, Martin, Emmanuel, and Edward had come. Our other friend Reagan was not able to get to the bus by its departure time and he joined us the following day.

This began the longest bus trip I have taken to date. I went listening to George Carlin’s “When will Jesus bring the pork chops?’’ I have listened to it before, so the jokes were a little less funny since I already expected what he was going to say. At some points, I slept off, then woke up to the bus hitting a hump or something of the sort. By about 4 or 5 am the following morning, we were at the Uganda-Rwanda border of Katuna. The process of crossing over was a little fast yet, somehow, a little slow. It was so cold and my hands were freezing!

After the immigration bureaucracies, we sped off into the land of a thousand hills. For a moment we were confused about the actual time. The weather outside looked like 8 am (Ugandan time). My phone, however, was showing 7 am! We later found out that Rwanda is in a different time zone from Uganda. It was 7 am (Rwandan time). 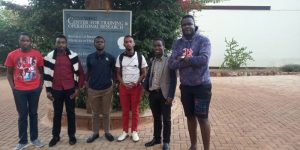 Kigali, Rwanda was quite different from Uganda. It appeared, without a doubt, cleaner (I deliberately went on looking out for plastic bag litter but I hardly saw any). Their water channels weren’t clogged (like a good number of ours back home), we were being driven on the right side of the road (unlike the left for Uganda), there were indeed many hills, and their city looked relatively less busy than ours. The rest were the same Ugandan stuff. Same house architecture (especially in the urban areas), same people lifestyles: clothing, general activities, and the same weather. By 9 am we were in Nyabugogo parking station.

We took our first major bunch of snaps in Rwanda there. Those of us that hadn’t exchanged our Uganda shillings to Rwanda Francs also did so from there. I was surprised (and a little embarrassed) that the Rwandan currency has more weight than the Ugandan currency. Our Rwandan contact, Mr. Nepo found us shortly thereafter and took us for our very first Rwandan meal- breakfast. It was enjoyable. Mr. Nepo was a nice host. He told us of many interesting stories about Rwanda. We received a pleasant welcome. 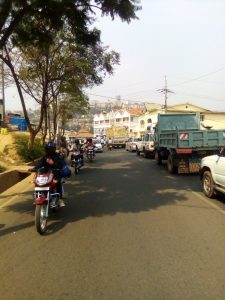 Another apparent difference between Uganda and Rwanda that I noticed as we broke our fast was that the ‘’boda-bodas’’ (motorcycle taxis) there seemed to much more strictly follow the rule of carrying only one passenger. They all had helmets for the passengers. This is unlike what takes place back home, and it is good as it reduces road accident-related trauma cases and deaths.

Next was the drive to Rwinkwavu in the Eastern province of the country. We were driven through Kigali. I must say that I had always imagined Kigali to be a small city (since it is in a small country!). Oh boy, I have always been wrong. Kigali is a relatively large city.

The drive to Rwinkwavu was rather long. We had been told it would take about two hours. I can’t say I am sure how long it took because I slept off along the way. You see, one other difference between Uganda and Rwanda was that the roads in Rwanda never seemed to have humps or potholes. It is no wonder therefore that the journey to Rwinkwavu was so smooth that we almost all slept off at some point. Not to mention that we were also tired by then.

All journeys come to an end, and so did this one. By 1 pm, we had arrived and settled into the secluded home of Partners in Health (Inshuti Mu Buzima), our hosts in Rwinkwavu. The place was a nice, quiet, and peaceful countryside settlement on one side of a hill overlooking a far way valley. It had most of the amenities to make our two weeks stay enjoyable. 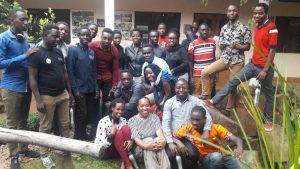 The following day, we were joined by twenty students from the University of Rwanda. We were to study the Social and Community Medicine (SOCOMED) course with them. By the end of it all, they were to become our very tight lifelong friends.

The following two weeks saw us having lectures, presentations, community visits, a screening session, a trip around Kigali, and a mine visit. The lecturers always made the sessions fun. Our sitting arrangement in a U-shape setup with students facing each other made the lectures more of interactive sessions and less of the traditional boring classes. The different topics we had over the two week period included; an introduction to the SOCOMED program, the Rwanda Health system, the SWOT analysis technique, communication skills, the community health program in Rwanda, leadership, social determinants of health, palliative care, research, health equity, disease prevention & health promotion, traditional medicine, quality improvement and team building, etc. We got to listen from the Executive Director of PIH in Rwanda- Dr. Joel Mubiligi, the Chief Human resource officer of PIH, the Head of informatics, the head of medical education and training and many others. This ensured that we got to learn knowledge and experiences from more than the medical perspective. We got career guidance, leadership skills, and strategies and many other attributes.For presentations, we were divided into different groups. We were sometimes then given group and individual assignments to present to the class. My assignment was to present about SDG 9 using Sao Tome and Principe as a case study. 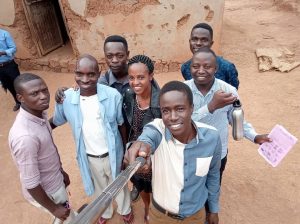 With the Community Health Worker, Mr. Emmanueri (2nd from the left)

We had several community visits. We visited community health workers first. We were surprised at how much the Rwanda Health Care system is relying on them. I realized they play a relatively bigger role in Rwanda than in my country (Uganda). They are provided with more resources also. For example, they must fill in the Health Information Management System (HMIS) Reports, they have clinical guidelines and treat malaria, pneumonia, diarrhea, cough & flu, and do health screening. They also seemed to have a relatively more advanced precision of clinical examination skills than their counterparts in my country.

They could identify jaundice, anemia, cyanosis, edema, dehydration, the different signs of respiratory distress, etc. They also had the necessary tools like Mid-Upper arm circumference (MUAC) tapes,  thermometers, timers, drugs, etc. Another community visit we had was to a chronically ill patient. Here I learned that Rwanda, unlike my home country, has a working health insurance scheme called ‘Mutuelle de Santé,’ and people pay subscription fees according to their economic groupings (ubudehe) which ensures that the poor ones pay relatively less than the rich ones to ensure equity. During this community visit, we passed by Akagera national park. It was an amazing view.

We also appreciated that in rural Rwanda, people live together in distinct villages called ‘umudugudu.’ This is unlike in Uganda where it is not uncommon to find people living in scattered homes away from everyone else. The umudugudus in Rwanda make it easier to get services closer to the people since they live in groups.

We had two non-communicable diseases screening sessions in Ndego. My role during the session was to measure random blood glucose levels using a glucometer. 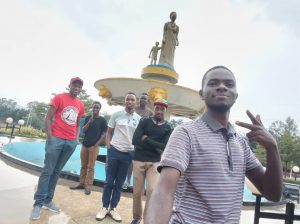 The first week ended earlier, on a public holiday called Umuganura (Friday).  It is a Thanksgiving Day. The day Rwandans celebrate their ever-bountiful harvest. We used the opportunity to have the following three days for ourselves in Kigali. In Kigali, we put up at the PIH house. We found Dr. Akiiki there with a good number of other people from different nationalities and career fields. We were nicely welcomed and had a good time there. By the time the three days of the long weekend were up, we had been to; the Kigali convention center, the genocide memorial center, Amahoro Stadium, Kigali airport, Kigali arena, Inema art gallery, downtown Kigali, etc. 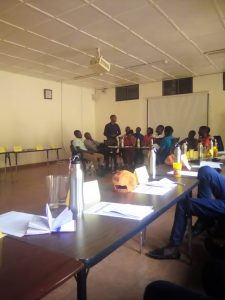 To appreciate different aspects of occupational health and safety, we on the second last day of our placement, went and visited the Rwinkwavu Wolfram mining site. We visited their offices where we were first told about the different health measures they have in place. We then proceeded to the mine itself and went a good number of meters down the mine tunnel. It was dark! I am kidding. There was light, but it was cold down there. Apart from appreciating the different health risks miners are exposed to, it was an exciting experience.

On the evening before the last day, PIH organized for us a farewell banquet. We had some good time with everyone and got our certificates. On the last day, the 9th day of August, we had the last presentations and sessions. We then prepared ourselves and were driven to Nyabugogo Bus Park where the whole story had started from. The bus we boarded departed at 5:45 pm and arrived in Kampala at 8 am. The story that had started with a long bus journey ended with an even longer bus journey.