Post by Tebogo Bolani, a medical student at University of Witswatersrand (South Africa), who recently completed a GEMx elective at the University Of Malawi College Of Medicine (Malawi).

Umuntu ngumuntu ngabantu. This a Zulu proverb that I have never fully appreciated until I arrived in Malawi. My first experience of Malawi was the airport – it was certainly not what I expected. We were welcomed by a small group of local children standing behind a fence waving at us stepping off the plane. It was humbling and exciting at the same time. I completed my elective at the Queen Elizabeth Central Hospital (QECH) in Malawi. We arrived on the 26 of November and stayed until 23 December 2017.

When we arrived at our temporary home at Kabula lodge, we were greeted with no electricity and no food and no means to get food. The food situation certainly improved throughout our stay, the electricity not so much. Power outages and load shedding occur regularly in Malawi. The country is reliant on hydro energy, but there has been a drought of late resulting in electricity shortages. All in all, the next month looked like it was going to be a challenge. We made it work though, we started cooking outside on a coal stove, locally called a Mbalula. Funnily enough the president came to town and for the entire duration of his stay we had continuous power. 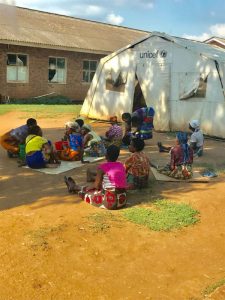 Monday morning, we woke up bright and early to go to the hospital. What struck me first was the bright colours from the chitenje that the locals wear. Malawians take pride in their culture. The chitenjes are used as clothing, bedding, to carry babies and many other uses that I have never encountered. I spent a significant amount of my time collecting different patterns and colours as gifts and to wear myself.

We were allocated to the internal medicine department, at our request. When I first walked into the ward I was shocked. It was nothing like I imagined. I expected a similar setting to South Africa, instead I found poverty and overcrowding but also the spirit of Ubuntu – which translates as “a person is a person through other people”. Malawians have a true sense of community. We joined the ward round and soon found out that resources are severely limited and that receiving something as basic as an ECG can be near impossible for the low-income patient. They do not have a Blood Gas machine or CT scanner. An MRI machine is available, provided the proper procedures are followed.

There are no barriers between patients resulting in no privacy, there are inadequate beds resulting in patients sleeping on mattresses on the floor and some even in the corridors.
One of the things that impressed me most about QECH is their ability to improvise. No chest drain is available, so they use a catheter, no hand sanitizer is available so they poke a hole in a bottle of spirit and use it as disinfectant. Also, they have what they call guardians. I am used to a system whereby nurses bear the brunt of the responsibility. In Malawi patients are always accompanied by their guardians. Guardians are family members that stay with the patient at all times, they do a lot of work that would ordinarily be considered the nurses’ job. Guardians empty catheters, give patients bed pans, feed patients and provide some of the medical history. They have no medical training and sometimes, they are a hazard (force feeding a patient with a reduced GCS), but I still consider them invaluable. Guardians sleep on the floor next to their relative without a blanket or pillow or mattress. I honestly believe they keep the hospital running. They exemplify the spirit of Ubuntu. 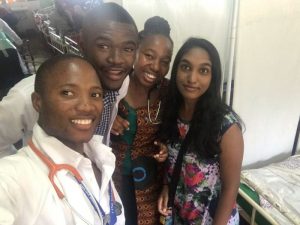 I have this memory in my head. It is the image of an elderly gentleman who was very ill. He was visibly wasted, weak and confused. His son was his guardian. Every day I would watch his son position himself behind his father on the bed and allow the father’s upper body to rest on his chest as he fed him. It was heart-breaking to watch. Partly because the father was very sick and had a poor prognosis, but also because his last moments where spent in a hot hospital, with flies everywhere that he did not even have the energy to swat off himself. It just seemed like a very unpleasant way to die, my only consolation is knowing that he was never alone, and his son was by his side.

Patients in Malawi seem to have a very high tolerance for pain. I was shocked when I assisted in performing a lumber puncture and no local anaesthetic was given. This is the norm here. Of all the patients that received a lumber puncture, not one screamed in pain. At home in South Africa local anaesthetic is used, and the majority of patients scream at the top of their lungs, so much so that the nurses come and check what is wrong. One of the senior doctors was asked why patients here never complain. He claimed that in the patient’s eyes, doctors can do no wrong and they are too polite to complain. The only response patients seem to have is to reach towards the hand causing the pain. But they never make a sound.

On a more positive note, the academic teaching in the internal medicine department is excellent. They have daily case presentations prepared by the students and everything from history, management and microbiology is thoroughly discussed. I learnt most during these early morning sessions. My Chest X-ray interpretation skills have improved. I loved that it is a platform for active learning. The consultants would sit in a line in the front row and the students and registrars behind them. After the presentation the consultants would ask questions about the case. It did not come across as an interrogation at all. It was academic discussion amongst academics.

The ward rounds where similar. Students are part of the work force. They clerk all the patients with the assistance of the intern and registrar and on Mondays and Thursdays present their patients on the consultant ward round. They ordered their own investigations and drugs as well. They are very independent when managing patients. Sometimes they would even come in on Sunday to prepare for Monday’s consultant ward round. 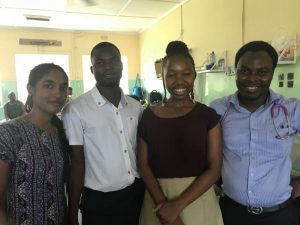 The ward round was another platform for teaching. I am accustomed to passive ward rounds where students do not really participate. But QECH certainly does not conform. The ward round is run by the students with help from the junior doctor. The students, which soon included us, would present most patients and then have a discussion with the consultant. It is probably what I enjoyed doing most. It was the perfect combination of theory, clinical skills and fun. Granted it was exceedingly stressful, because of the pressure and fear of doing something wrong, but it always worked out in the end.Once we got the hang of how things worked we started seeing our own patients. I found it very satisfying to be managing my own patients from admission to discharge. I was certainly grateful for the help that the students and registrar provided. It was probably the first time I have ever felt like I am really becoming a doctor. It was stressful at the best of times and writing a discharge summary in the health passport is time consuming, but the joy of doing something right outweighs it all.

Looking back now, my experience at the hospital is not what I expected at all. We were necessary labour and I appreciated that. We became part of the team. We made friends with the students so much so that even though they have left, we still chat with them on WhatsApp group. My independence has definitely been put to the test. Being away from the comforts of home was difficult but bearable. I got used to the new normal. I think I gained more completing my elective internationally than I could have at home. I developed my ability to communicate with people that don’t speak the same language and my ability to adapt to a new community and culture. I also succeeded at performing procedures that I have repeatedly failed at, at home (lumber punctures). Additionally, I have proved to myself that I can live in another country and still be happy.