I recently had the opportunity to travel to Mexico City, Mexico to from February 3-7 for the 5th Edition of the of CICoM (Concurso Internacional de Conocimientos Médicos), taking place at Universidad Nacional Autónoma de México’s (UNAM) Campus.  UNAM is a GEMx partner and has maintained a membership in the GEMx global network since the pilot of the program in 2013.  Through this partnership, the GEMx staff has forged long-standing relationships with leadership at UNAM, including Dr. Melissa M Islas Upegui, who oversees the International Program at the Faculty of Medicine, Movilidad Académica y Vinculación Interinstitucional (Mavi), and Dr. Irene Durante Montiel,  Secretary-General of the medical school.

GEMx was proud to be a sponsor for the fourth consecutive edition of the event, and it was an honor to witness the competition and observe the impressive display of medical knowledge demonstrated by student participants was hugely impressive.  As part of GEMx’s sponsorship, we were given the opportunity to present on GEMx global exchange network and other ECFMG | FAIMER service during the competition. 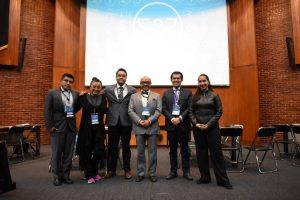 CICoM was launched in 2014, and has been taking place annually since its commencement (the quiz was canceled in 2017 due to the earthquake that hit Mexico City).  The event is student-run, with a self-elected organizing committee responsible for organizing and coordinating the competition.

This year, 28 teams participated from across Latin America, with six students per team, and a least one faculty member accompanying them to the Mexico City.

The contest is divided into multiple rounds.  Each round includes the 15 questions, with 60 seconds provided to teams to huddle and decide on their answer to each question.  Teams then have five seconds to appeal to the jury, consisting of six medical professionals practicing in Mexico City. After the first round, the 16 top-scoring universities advance, with the remaining universities participating in the “Repechage”  or “consolation” bracket.

This tournament format continues over the next three days, ending in a head-to-head round competition between the remaining two teams.

The final standings of the 2020 CICoM competition were: 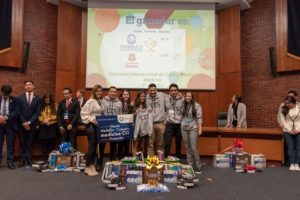 Third Place  – Autonomous University of the State of Morelos (Mexico)

Congratulations to all participants in this year’s CICoM event, and a special “felicitations” to the winning team from CES University in Medellín, Colombia (a GEMx partner!)

“I feel very happy, since it is a very positive experience that is full of learning, not just about Medicine. It is an opportunity to make new friends. ”Diana Marcela Lizate, University of Manizales,
Colombia.

“For my team and for me, it was a great pride to be here, representing our state and our faculty in this house of studies. We are very happy to have this experience. ” Oscar García Carbajal, Veracruzana University, Mexico

In addition to the medical knowledge competition, quiz participants enjoyed various cultural activities, such as guided visits to the archaeological zone of Teotihuacán, to the Historic Center of Mexico City, and the School of Medicine building.   Students also had the opportunity to take in performances by UNAM’s  Mexican Folk Company, as well as the UNAM orchestra.

CICoM is open to all medical schools internationally.  If you are a medical student interested in participating in a future edition of the quiz, message CICoM through one of their social channels (Facebook, Instagram, Instagram) and a member of their organizing committee will be able to provide information and next steps in registering a team from your institution.