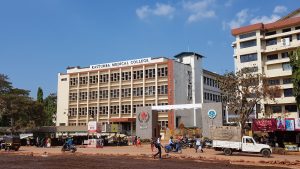 Located in Karnataka, India, Kasturba Medical College (KMC) Manipal is a constituent of Manipal Academy of Higher Education. Since its establishment by TMA Pai in 1953, KMC Manipal has held on to the mission of training competent, compassionate, and caring physicians by providing exceptional clinical teaching. With quality medical graduates practicing worldwide, along with having a college campus and a hospital here, as such Malaysians are no strangers to the name “Manipal”.

As part of the RUMC curriculum, an elective component was made mandatory for students prior to graduation, promoting medical knowledge exchange through learning from a system, settings and practices not familiar to the student however, what excited me the most, was the opportunity to travel and experience a cultural exchange. I can still remember attending a sharing session by the RUMC GEMx Ambassador, Dr Low Yik Chin back when I was a fresh third year student in RUMC. Being inspired by her experience, I decided to do my elective at KMC Manipal. As such, I submitted my application in February 2019 and was offered a place in KMC Manipal shortly after the submission of my application. 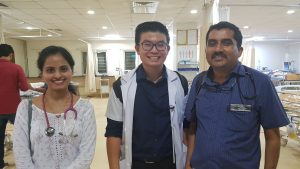 My elective journey in KMC Manipal began in December 2019, where I was attached to the Department of Internal Medicine, under the guidance of Dr Mukhayprana Prabhu, Professor of Medicine and Head of Unit 8 within the department. During the elective placement, I was given the opportunity to join the students in ward rounds and clinical bedside teachings by Dr Prabhu and the resident doctors. This gave me the opportunity to enhance my knowledge on appreciating clinical signs and symptoms as well as opening my eyes to rampant tropical diseases which were not commonly seen in Malaysia. Seeing rare diseases like these was a learning experience of a lifetime. Also beyond my expectations was the opportunity to write a case report on a rare facial fungal infection, working with Dr Prabhu and other authors, which we intend to submit for a journal publication in the future. 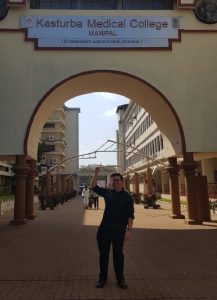 Physicians used to rely on their senses; seeing, hearing, smelling, and feeling for physical anomalies to guide their diagnosis. Technological advancement has slowly superseded the role of a clinical examination in reaching a diagnosis, and although they are more sensitive and specific, they could also cause harm to patients, e.g. pain during blood taking and radiation exposure while taking an x-ray. However, this doesn’t demean the importance of these investigative tools. As such, the recipe of a good doctor would be having a strong foundation on the wisdom of modern medicine in appreciating clinical signs and symptoms and to apply evidence based practices effectively.

One of the biggest challenges that I have faced during my elective placement is the language barrier. Despite having the teaching and discussions conducted in English, most of the patients admitted were unable to converse in English, and with my inability to converse in Kannada, I was initially fearful that this compromised my learning, as clinical learning relies on communication with patients. However, the challenge was easily overcome with the help from my peers and the resident doctor, Dr Poonam Kamath, who have willingly took some of their valuable time to translate and explain the patients’ conditions to me. 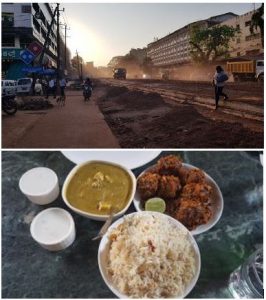 With Malaysia being a big cultural melting pot that consists of three major race groups (Malay, Chinese and Indian), I was exposed to different cultures from a young age, and have always loved Indian cuisine. There are many things that I enjoy and like about India, the colourful sarees, the smell of incense and spices, the scenery comprising animals like cows and dogs roaming freely in the streets, the taste of delicious and authentic Indian cuisine, and the amazing Indian hospitality. As I travelled to India alone, I initially experienced some culture shocks and difficulty in adapting to life in India. But it is due to their amazing hospitality, and the kindness from a stranger who later become a friend, that I never felt lonely and my journey in India turned out to be amazing. 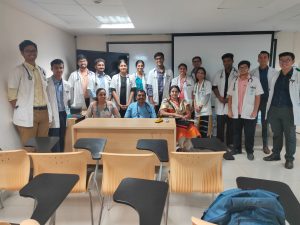 More than an opportunity for academic and clinical knowledge development, my elective journey in KMC Manipal, India has allowed me to expand my social networks and form many valuable friendships. Strong bonds were created even though it was just a short 4 week elective. Multiple life lessons have impacted me and lead me to count my blessings. I would like to take this opportunity to thank Dr Prabhu, the resident doctors, and my fellow peers who made this elective journey a fruitful and memorable one. Some feelings are hard to express in words, so to conclude my elective journey in KMC Manipal, I would say “Veni, Vidi, Amavi”. Tags: India, Internal Medicine, Kasturba, KMC Manipal, Malaysia, RCSI, RCSI &UCD Malaysia Campus